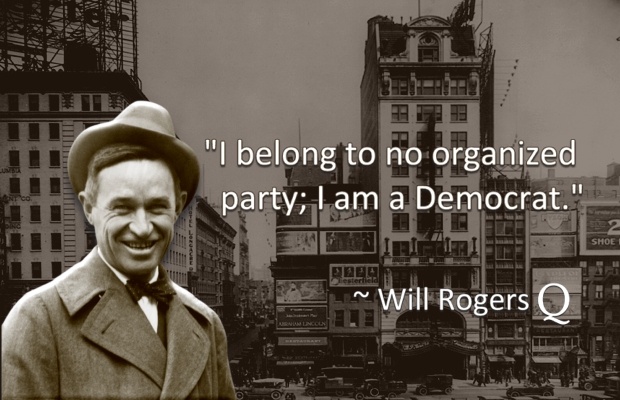 Will Rogers most famous quote on being a Democrat also trivialised the party: “I belong to no organized party; I am a Democrat,” he said.

While there is a widespread acceptance that Rogers was a Democrat, perhaps the better view is that he was politically non-aligned, at least in a public sense. He is known to have supported the presidential candidacies of Calvin Coolidge, a Republican, and Franklin D. Roosevelt, a Democrat. But he was egalitarian in his observational humour about both parties.

Rogers admired Roosevelt and supported the New Deal but also found in it inspiration for many jokes.

Will Rogers on the Democratic Party

“It takes nerve to be a Democrat, but it takes money to be a Republican.“

“Democrats take the whole thing as a joke. Republicans take it serious but run it like a joke.“

“I will admit it has rained more under Republican administrations. That was partially because they have had more administration than Democrats.“

“A cannibal is a good deal like a Democrat, they are forced to live off each other.“

“I generally give the party in power, whether Republican or Democrat, the more digs because they are generally doing the country more damage.“

“A flock of Democrats will replace a mess of Republicans. It won’t mean a thing. They will go in like all the rest of ’em. Go in on promises and come out on alibis.“

“The Republicans mopped up, the Democrats gummed up, and I will now try and sum up. Things are terribly dull now. We won’t have any more serious comedy until Congress meets.“

“If a man wants to stand well socially, he can’t afford to be seen with either the Democrats or the Republicans.“

“The more education he gets the less apt he is to be a Democrat and if he is very highly educated he will see the apple sauce in both parties.“

“Democrats, you can’t shame them into even dying. They would keep on living just to spite the Republicans.“

Rogers was born in 1879 on Native American land that now forms part of Oklahoma, He was of Cherokee descent.

As a young man, he worked as a horse-breaker before joining a circus to perform rope tricks.

In 1916 he joined the Ziegfeld Follies and gained fame as a wise-cracker (or talkin’ fool as he liked to put it). His monologues, delivered in a down-home folksy style, gained national fame. Even so, they were biting and to the point, and the public came to appreciate Rogers as a man of exulted common sense. His most famous remarks were about government and politicians.

Rogers typically followed a biting comment with self-effacing humour or a platitude to relieve tension.

He had an astonishing work ethic and diverse interests: Rogers appeared in sixty-nine films, undertook exhausting national lecture tours, worked on radio and Broadway and as Goodwill Ambassador to Mexico.

As if that wasn’t enough, Rogers wrote numerous books and essays and was a newspaper columnist from 1922 until his death.

Rogers had a passion for aviation and was an advocate for the industry. He was killed in a plane crash in Alaska on15th August 1935