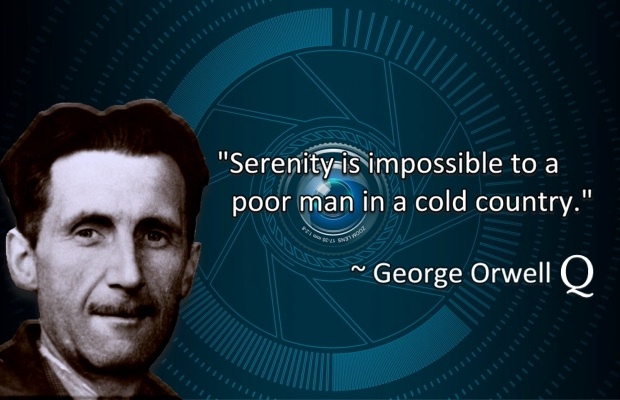 To understand poverty, it causes and consequences, Orwell spent intermittent years of his life immersed with the impoverished, unemployed and down-and-outs of London, Paris and Spain, living as they did. Consequently, given his gift of language, quotes by George Orwell on poverty have uncommon authority.

Following are selected quotes on poverty by Orwell with annotations.

No tranquillity for the poor

“Serenity is impossible to a poor man in a cold country.”

This quote appeared in an article called ‘Review of The Two Carlyles by Osbert Burdett’, written by Orwell under his real name, Eric Blair, for The Adelphi magazine in 1931.

In this piece, Orwell expresses the view that opulent people would find it ‘cowardly’ to complain about tight boots because they can always change them. The well-fed live in a world where “their minds are not warped by petty discomfort”. On the other hand, Orwell argues, the poor are not preoccupied “with art or religion, but with bad food, hard beds, drudgery and the sack”. For the likes of them, there can be no tranquillity.

“Poverty frees them from normal standards of behaviour, just as money frees people from work.”

Orwell describes the indigents of the Paris slums as eccentrics liberated from normal societal constraints by poverty — “people who have fallen into solitary, half-mad grooves of life and given up trying to be normal or decent.”

“For, when you are approaching poverty, you make one discovery which outweighs some of the others. You discover boredom and mean complications and the beginnings of hunger, but you also discover the great redeeming feature of poverty: the fact that it annihilates the future.”

Orwell notes that “within certain limits” having less money also means having fewer worries. To make his point he compares the anxieties of a person with one hundred francs to those of a person with only three francs. When confronted by the harsh reality of their prospects, both people become anxious, but not in the same way or to the same degree.

Orwell concludes that the person with three francs has less to be concerned about, because three francs will sustain a person for another day (on a bread and margarine diet) and there is no point thinking beyond that. He wrote: “You are bored, but you are not afraid. You think vaguely, ‘I shall be starving in a day or two–shocking, isn’t it?’ And then the mind wanders to other topics.”

In Orwell’s experience, there was a consolation to be found in poverty. He describes it as “a feeling of relief, almost of pleasure, at knowing yourself at last genuinely down and out . . . You have talked so often of going to the dogs — and well, here are the dogs, and you have reached them, and you can stand it. It takes off a lot of anxiety.”

“Hunger reduces one to an utterly spineless, brainless condition, more like the after-effects of influenza than anything else. It is as though all one’s blood had been pumped out and lukewarm water substituted.”

“It is fatal to look hungry. It makes people want to kick you.”

Through the relationships he formed with indigents, and their shared experiences, Orwell offers remarkable insights into the lives and backgrounds of beggars. His encounters with Paddy the Tramp and Bozo, are particularly revealing.

Orwell travels with Paddy for a couple of weeks during which time he shows Orwell how to scrounge, fill his belly and find a bed for the night. Paddy, like most indigents, likes to establish a point of difference. He is very particular about his dress. He wears an old tweed shooting jacket and braided trousers. Paddy tends the braid with care and sews it back when it comes loose. Orwell notes: “Evidently the braid figured in his mind as a lingering scrap of respectability.”

Paddy’s self-pity is always evident. He constantly dwells on his bad luck. But he is generous too, and always willing to share any food he could scrounge with Orwell.

In London, Paddy and Orwell meet up with Bozzo, Paddy’s friend. Bozzo is a screever (a pavement artist) and he is serious about his trade. Here Orwell paraphrases a quote by Bozzo on his vocation:

“I don’t draw in blackboard chalks like these others, I use proper colours the same as what painters use; bloody expensive they are, especially the reds. I use five bobs’ worth of colours in a long day, and never less than two bobs’ worth.”

Bozzo is indigent, but not a beggar by modern standards. Today, Buskers and street artists have licences, permits and some make out quite well.

Bozzo tells Orwell of his contempt for the other screevers who draw the same monochrome images every day. Bozzo, on the other hand, draws a fresh and topical cartoon each day. His likenesses are copied from newspapers and saved in a penny notebook. But it seems that any sketch with socialist undertones is taboo and the police sometimes insist that Bozzo rub out a cartoon. Bozzo is pragmatic about it:

“I had to rub it out. The copper’s got the right to move you on for loitering, and it’s no good giving them a back answer.”

Bozzo has contempt for other beggars, his friend Paddy included:

“Look at Paddy—a tea-swilling old moocher, only fit to scrounge for fag-ends. That’s the way most of them go.”

Bozzo distinguishes himself from other beggars by his refusal to demonstrate gratitude or collect discarded cigarette butts. Orwell recalls:

“He was ready to extract every penny he could from charity, provided that he was not expected to say thank you for it. He avoided religious charities, however, for he said it stuck in his throat to sing hymns for buns. He had various other points of honour; for instance, it was his boast that never in his life, even when starving, had he picked up a cigarette end.”

Ultimately, Orwell concludes that begging is a profession:

“A beggar works by standing out of doors in all weathers and getting varicose veins, bronchitis etc. It is a trade like any other; quite useless, of course — but, then, many reputable trades are quite useless.”

Orwell spends a night with Paddy the Tramp in a lodging-house in a back alley near The Strand. The residents are crammed fifteen to a room, and the smell of urine is all pervasive.

As Orwell settles into his bed, an alcohol-affected but well-spoken man looms over him and says: “An old public schoolboy, what? Don’t meet many of the old school here. I am an old Etonian.”

The old Etonian then breaks into the school boating song and is told to stop the noise by other down-and-outs. The old Etonian shares his contempt for others with Orwell:  “Low types . . .  very low types. Funny sort of place for you and me, eh?”

Then the old Etonian explains to Orwell that his friends have written him off because he is ‘past redemption’, a fact he accepts as truth. However, like so many indigents that Orwell encounters, the old Etonian sets himself above the others:

“I’ve come down in the world; not like these here, who couldn’t come down if they tried. We chaps who have come down ought to hang together a bit. Youth will be still in our faces—you know. May I offer you a drink?”

The old Etonian is quite well-dressed, and Orwell later notices the man’s highly polished patent leather shoes sticking out from a filthy bed.

George Orwell’s early life may seem paradoxical to those who know him only by his writings and the values for which he stood.

Eric Arthur Blair, best known by his pseudonym George Orwell, was born in Motihari, India on 25th June 1903. His father, Richard Walmesley Blair, was attached to the infamous Opium Department of the Indian Civil Service. Orwell’s mother, Ida Mabel Limouzin, the daughter of a French speculator, was raised in Moulmein, Burma.

Orwell was educated at St Cyprian’s School in East Sussex and at Eton College. He did not attend university. Instead, he joined the Imperial Police in 1922 and chose a posting in Burma where his maternal grandmother lived.

In Burma, although Orwell was tasked with great responsibilities, he gained a reputation for being a loner. In fact, he had formed relationships within the local Karen community and learned to speak Burmese fluently.

Orwell resigned from the Imperial Police in 1928 to become a writer. He had come to regard British Imperialism as despotic and regretted his role in it.

Destructive poverty was the recurring theme of Orwell’s early works, and he lived as a tramp intermittently for a number of years to experience first-hand the living conditions and deprivations of the indigent communities of Paris and London.  Down and Out in Paris and London (1933) and The Road to Wigan Pier (1937)were two of Orwell’s major works from this period. But he also wrote many essays and magazine articles.

In 1936, Orwell travelled to Spain to fight in the Spanish Civil War on the side of the Republicans. He was shot in the throat and returned to England to recuperate. Homage to Catalonia (1938) is an account of Orwell’s wartime experiences and marks the point in his writing career when his narrative shifts to reflect his anti-fascist and anti-totalitarian beliefs. He also publicly aligns himself with the Democratic Socialist movement.

Today, we remember Orwell primarily for Animal Farm (1945) and its companion novel Nineteen Eighty-Four (1949). Both novels are based on Stalinist Russia. The first novel deals with revolution and the rise of a totalitarian regime, and the second focusses on the consequences – mass surveillance, repression and regimentation, and the manipulation of facts and history.

Terms such as ‘Big Brother’, ‘Thought Police’, ‘Proles’, and ‘Unperson’, coined in Orwell’s novels, have been embraced by popular culture.

Orwell died in London of tuberculosis on 21st January 1950. He was laid to rest in All Saints’ parish churchyard, Sutton Courtenay, Oxfordshire. His gravestone identifies him as Eric Arthur Blair and makes no reference to George Orwell or his works.