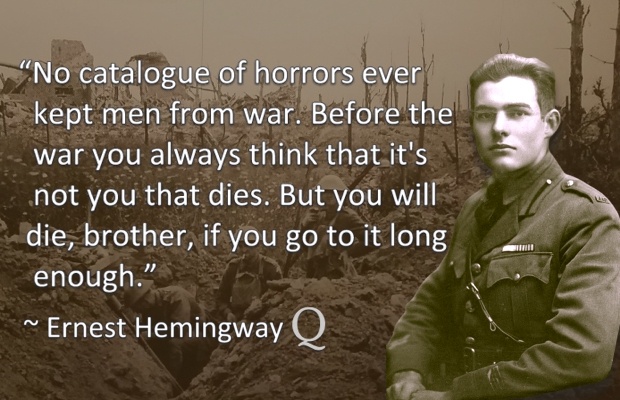 Whatever you care to make of Hemingway’s quotes about war (he was prone to a little self-glorification) they were fully founded on his personal experiences. He served in or reported on five theatres of war over four decades. Hemingway understood the things that inspired fighting men and the things that dismayed them, and he knew what it was like to tend to the dying and wounded and to be seriously injured himself.

“I was always embarrassed by the words sacred, glorious, and sacrifice and the expression in vain. We had heard them, on proclamations that were slapped up by billposters over other proclamations, now for a long time, and I had seen nothing sacred, and the things that were glorious had no glory and the sacrifices were like the stockyards at Chicago if nothing was done with the meat except to bury it. There were so many words that you could not stand to hear and finally only the names of places had dignity. Certain numbers were the same way and certain dates . . . ”

“The first panacea for a mismanaged nation is inflation of the currency; the second is war. Both bring a temporary prosperity; both bring a permanent ruin. But both are the refuge of political and economic opportunists.”

“War is made or planned now by individual men, demagogues and dictators who play on the patriotism of their people to mislead them into a belief in the great fallacy of war when all their vaunted reforms have failed to satisfy the people they misrule.”

“We in America should see that no man is ever given, no matter how gradually or how noble and excellent the man, the power to put this country into a war which is now being prepared and brought closer each day with all the pre-meditation of a long planned murder.”

“They wrote in the old days that it is sweet and fitting to die for ones country. But in modern war there is nothing sweet nor fitting in your dying. You will die like a dog for no good reason.”

“No catalogue of horrors ever kept men from war. Before the war, you always think that it’s not you that dies. But you will die, brother, if you go to it long enough.”

“He was just a coward and that was the worst luck any man could have.”

“If every one said orders were impossible to carry out when they were received where would you be? Where would we all be if you just said, “Impossible,” when orders came?”

“No weapon has ever settled a moral problem. It can impose a solution but it cannot guarantee it to be a just one. You can wipe out your opponents. But if you do it unjustly you become eligible for being wiped out yourself.”

“An aggressive war is the great crime against everything good in the world. A defensive war, which must necessarily turn to aggressive at the earliest moment, is the necessary great counter-crime. But never think that war, no matter how necessary, nor how justified, is not a crime. Ask the infantry and ask the dead.”

“We have fought this war and won it. Now let us not be sanctimonious; nor hypocritical; nor vengeful; nor stupid. Let us make our enemies incapable of ever making war again, let us re-educate them, let us learn to live in peace and justice with all countries and all peoples in this world. To do this we must educate and re-educate. But first we must educate ourselves.”

“When you go to war as a boy you have a great illusion of immortality. Other people get killed; not you . . . Then when you are badly wounded the first time you lose that illusion and you know it can happen to you. After being severely wounded two weeks before my nineteenth birthday I had a bad time until I figured out that nothing could happen to me that had not happened to all men before me. Whatever I had to do men had always done. If they had done it then I could do it too and the best thing was not to worry about it.”

“The Germans are not successful because they are supermen. They are simply practical professionals in war who have abandoned all the old theories.”

Born in Oak Park, Illinois, a suburb of Chicago, on July 21, 1899, Ernest Hemingway was the second of six children born to Clarence Edmonds Hemingway, a doctor, and Grace Hall Hemingway, a musician, opera singer and painter.

Hemingway, who was not university educated, joined the Kansas Star as a cub reporter in 1917. The following year, he volunteered to serve as an ambulance driver with the Red Cross on the Italian front during World War I. He was severely injured and twice decorated for his service.

After the War, Hemingway returned to the United States and married Hadley Richardson, in 1921. Then, having secured a position as a foreign correspondent with the Toronto Star, the couple moved to Paris the same year.

Hemingway’s most significant work for Toronto Star was his reporting of the Greco-Turkish war – he personally witnessed the burning of Smyrna. However, after only two years as correspondent, he quit journalism to become a full-time fiction writer.

In Paris, Hemingway moved in the same circles as fellow American expatriates Ezra Pound and Gertrude Stein who were formative influences on his writing style. He gained early recognition in writing circles for his first two published works, Three Stories and Ten Poems (1923) and In Our Time (1925) and earned wider fame for his satirical novella, The Torrents of Spring (1925).

In 1926, Hemingway’s breakthrough novel, The Sun Also Rises, brough him critical acclaim and international celebrity. In this novel, Hemingway demonstrated a new style of narrative that would profoundly influence the direction of twentieth century American literature. He called it the ‘Iceberg Theory’ and describes it in the following quote:

“If a writer of prose knows enough of what he is writing about he may omit things that he knows and the reader, if the writer is writing truly enough, will have a feeling of those things as strongly as though the writer had stated them. The dignity of movement of an ice-berg is due to only one-eighth of it being above water. A writer who omits things because he does not know them only makes hollow places in his writing.”

Scholars are dismayed by how Hemingway so rapidly transformed from a relatively inexperienced journalist into a fully formed novelist.

Hemingway said, “Write what you know, leave out unnecessary words, and don’t do it to be famous,” and he had extraordinary experiences to write about: he had been a soldier, bullfighting aficionado, big-game hunter, boxer and deep-sea fisherman and wartime correspondent.

Hemingway reported on World War II from the western front for Colliers’s Magazine and was with allied forces during the liberation of Paris.

Following the war, Hemingway’s creative output fell into decline due to alcoholism and mental health issues, and the work he did see published was not well-received.

With the publication of The Old Man and the Sea (1952), Hemingway’s reputation was restored, and his legacy established. He was awarded the Pulitzer Prize in 1953 and the Nobel Prize for Literature the following year.

The Old Man and the Sea would be the last work by Hemingway published during his lifetime. He died by his own hand on 2nd July 1961 at the age of sixty-one.