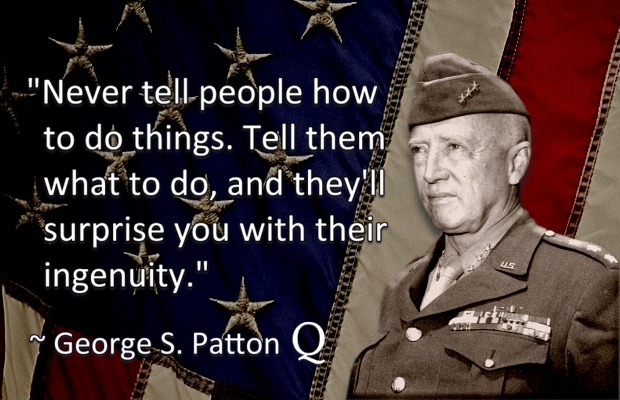 During World War II, General George Patton was a controversial figure, as well-known for his inappropriate comments and conduct as he was for his military brilliance. Today, he is better remembered for the philosophies that drove him to victory. Patton’s quotes on leadership are frequently echoed by public speakers and business leaders.

We’ve put together a small collection of Patton’s most popular quotations on leadership with some explanatory notes.

“I believe that an ounce of sweat will save a gallon of blood.”

This quote is taken from one of Patton’s speeches to the Third Army before the allied invasion of France in 1944. He qualified this remark by adding: “Pushing means fewer casualties. I want you all to remember that.”

Patton realised he would receive many complaints about pushing his men too hard. But his comments were prophetic:  Following the invasion, The Third Army made an awe-inspiring push into northern France, covering nearly one hundred kilometres in two weeks.

“Take calculated risks. That is quite different from being rash,”

Generals Eisenhower and Marshall had concerns about Patton’s rashness when they appointed Omar Bradley, Patton’s subordinate, to lead the Allied invasion of France. However, when the 101st Airborne Division was surrounded by Germans at Bastogne, an emergency meeting of allied generals was convened and it fell to Patton to provide a solution.

When Patton told the assembled generals that he could move to reinforce Bastogne immediately, Eisenhauer is reported to have cautioned Patton about executing rash plans. But Patton had anticipated the scenario he was facing and had already prepared a contingency plan that was good to go. Patton pushed through to relieve the forces at Bastogne and demonstrated that his actions were well-calculated.

“A good plan, violently executed now, is better than a perfect plan next week.”

Patton believed that military leaders should make their plans as best they can, underpinned by the most reliable intelligence available, and execute them with urgency and total commitment. He felt tactical and strategic opportunities were too often lost to indecision.

A variation of Patton’s quote: “A good plan today is better than a perfect plan tomorrow,” is commonly offered as advice for business leaders.

“But the drilling has made veterans of all you men. You are ready! A man has to be alert all the time if he expects to keep on breathing.”

Patton was aware of the constant complaints about drilling and reminded his men that their survival depended on it. Patton had no time for a soldier “who is not always on his toes”. Drilling was “to ensure instant obedience to orders and to create constant alertness”.

Patton told his men that there were four hundred German graves in Sicily because his men had found one German soldier asleep before his officer had.

“We herd sheep, we drive cattle, we lead people. Lead me, follow me, or get out of my way.”

This Patton quote was informed by Thomas Paine’s “lead, follow, or get out of the way”. Patton believed that the men of his command should be well-drilled and well-led. Each man in the chain of command was expected to execute his duties obediently, confident in the knowledge that everyone else would do the same.

“Never tell people how to do things. Tell them what to do, and they will surprise you with their ingenuity.”

A quote from General Patton’s wartime memoirs, War as I knew It, published posthumously in 1947.

George Smith Patton (November 11, 1885 – December 21, 1945) gained fame as a U.S. Army general during World War II. He is best remembered for his leadership of the U.S. Third Army during the allied liberation of Europe.

After being home-schooled until the age of eleven, was educated at Stephen Clark’s School for Boys, Pasadena, California.

In 1909, Patton graduated from Westpoint Military Academy and was commissioned as a second lieutenant in the U.S. Army Cavalry.

Patton’s war service was wide-ranging. He served as a first lieutenant during The Pancho Villa Expedition (1915 -1917) and in France and Germany during World War I during which time he rose in rank from captain to lieutenant colonel. During World War II, Patton served in North Africa (1942) as a brigadier general, in Sicily (1943) as a lieutenant general, in France Luxemburg and Belgium (1944), and as a General in Germany (1945).

According to Patton biographer, Ladislas Farago, Patton was the allied general most feared by the German high command. In spite of that, Patton was a controversial figure in the United States – he made frequent, public statements perceived to be unbefitting his office and once, notoriously, slapped two shell shocked soldiers for cowardice.

Patton died in Occupied Germany on 21st December 1945 from injuries sustained in a car accident.

He is buried in the Luxembourg American Cemetery and Memorial with men of the Third Army who fell under his leadership.