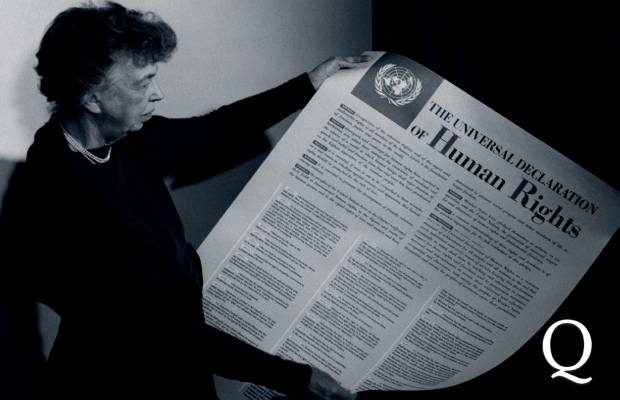 Born on 11th October 1884, Anna Eleanor Roosevelt was the longest-serving first lady of the United States of America. She is remembered for her independence of thought, political activism, and outspoken support for the civil rights of women and ethnic minorities. One of Eleanor Roosevelt’s most famous quotes reveals her grit and integrity:

Eleanor’s parents both passed away during her early childhood, and she and her two younger brothers were raised by their maternal grandmother, Mary Ludlow Hall. These early losses may have contributed to Eleanor’s lifelong struggle with depression.

Eleanor was privately tutored until the age of fifteen when she was sent to a finishing school, The Allenswood Academy in Wimbledon, England, to complete her education.

Eleanor considered herself to be an unattractive young woman, but she was self-assured. She later said:

“No matter how plain a woman may be if truth and loyalty are stamped upon her face all will be attracted to her.”

When Franklin was struck down by a paralytic illness that denied him the use of his legs, Eleanor encouraged him to remain in politics. She made public appearances and delivered speeches on his behalf.

Franklin Roosevelt was elected Governor of New York in 1928 and, during his tenure, Eleanor continued to represent him actively.

At the height of the great depression, Franklin Roosevelt was elected President of the United States. He served in office from 1933 to 1945, making him America’s longest-serving president. Meanwhile, Eleanor set about redefining the role of the first lady – as a lecturer and columnist, and prolific author of books, her salary matched her husband’s, and she gave most of it to charities.

Today, she is widely respected for her political activism, philanthropy and support for minority causes. But she was a controversial figure at the time and often criticised for openly opposing government policies. Moreover, Eleanor’s support for civil rights raised the anger of J. Edgar Hoover, who detested her liberal values and may have been behind ubiquitous anecdotes relating to her sexuality.

When the U.S entered World War II, Eleanor lobbied for greater participation by women and African Americans in the war effort. She encouraged women to acquire job skills and campaigned for government-subsidised daycare solutions.

Eleanor visited England with Franklin in 1942. The tour was a great success, and she was met by enthusiastic crowds wherever she spoke. She later toured the Pacific Theatre alone. Admiral Halsey was particularly appreciative her of the presence and the positive effect it had on morale in the military.

When Franklin D. Roosevelt died on 12th April 1945, with the end of the war in sight, Harry S. Truman became president and appointed Eleanor Roosevelt as the first U.S. delegate to the United Nations, a role she filled from 1946 until 1953. She also played an instrumental role in drafting The Universal Declaration of Human Rights which she called, “The international Magna Carta of all men everywhere”. She also served as 1st Chair on the United Nations Commissions on Human Rights from 1946 to 1952.

John F. Kennedy appointed Eleanor Roosevelt as 1st Chair of the Presidential Commission on the Status of Women. She filled this role from his inauguration until her death on 7th November 1962 from complications due to aplastic anaemia.

“You gain strength, courage, and confidence by every experience in which you really stop to look fear in the face. You are able to say to yourself, ‘I lived through this horror. I can take the next thing that comes along.”

“A woman is like a teabag. You never know how strong it is until it’s in hot water.”

“A mature person is one who does not think only in absolutes, who is able to be objective even when deeply stirred emotionally, who has learned that there is both good and bad in all people and in all things, and who walks humbly and deals charitably with the circumstances of life, knowing that in this world no one is all-knowing and therefore all of us need both love and charity.”

“It is not fair to ask of others what you are not willing to do yourself.”

“The battle for the individual rights of women is one of long-standing and none of us should countenance anything which undermines it.”

“Hate and force cannot be in just a part of the world without having an effect on the rest of it.”

“Life is what you make it. Always has been, always will be.”

“Remember always that you not only have the right to be an individual, you have an obligation to be one.”

“If life were predictable it would cease to be life, and be without flavor.”

“The giving of love is an education in itself.”

“Life must be lived and curiosity kept alive. One must never, for whatever reason, turn his back on life.”

“Since you get more joy out of giving joy to others, you should put a good deal of thought into the happiness that you are able to give.”

“Do one thing every day that scares you.”

“The future belongs to those who believe in the beauty of their dreams.”

“Many people will walk in and out of your life, but only true friends will leave footprints in your heart.”

“You can often change your circumstances by changing your attitude.”

“If someone betrays you once, it’s their fault; if they betray you twice, it’s your fault.”

“If someone betrays you once, it’s their fault; if they betray you twice, it’s your fault.”