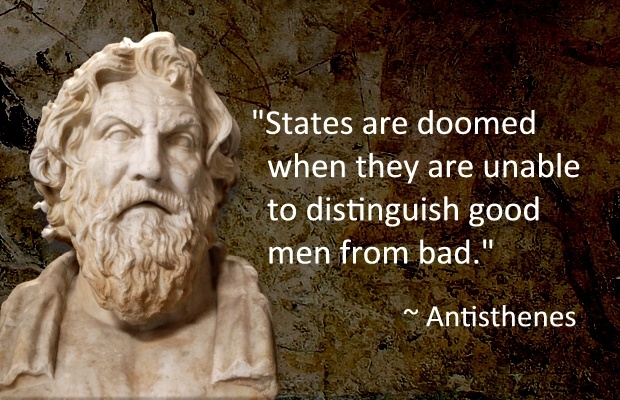 Antisthenes was a disciple of Socrates and later founded the Cynical School of Philosophy which came to prominence in the 3rd Century under his student, Diogenes of Sinope, the school’s most celebrated and controversial adherent. The movement’s early roots, doctrines and rationales can be recognised in the biography and quotes of Antisthenes. The core message of his philosophy was the importance of leading a virtuous life. Yet, Antisthenes’ concept of virtue differed from that of contemporary Athenian philosophers, who often regarded non-Athenians as barbarians.

Born in Athens c. 445 BCE, Antisthenes was the son of an Athenian father and a Thracian mother who some have suggested was a slave. Antisthenes, like Diogenes to follow, would have been looked down upon by highborn Athenians, and this would have had a profound influence on his early life and attitudes.

“Virtue can be taught, and nobility belongs to none other than the virtuous.”

In his youth, Antisthenes fought at the Battle of Tanagra during the Peloponnesian Wars. On his return to Athens, he became a student of Gorgias and then a devoted disciple of Socrates, who taught the children of the poor, a practice Antisthenes embraced.

When Socrates was executed for his beliefs, Antisthenes was present to pay tribute to his master. Then he left Athens to fight at the Battle of Leuctra. He would never forgive the tyrants responsible for Socrates’ downfall and death.

“States are doomed when they are unable to distinguish good men from bad.”

Antisthenes and the Cynics

After surviving the Theban victory at Leuctra, a battle Antisthenes described as, “a set of schoolboys beating their master,” he lectured at Cynosarges – a gymnasium used by citizens born to foreign mothers. It is believed to have derived its name from an ancient Greek term for a white or swift dog and, by some, to be the root of the term ‘Cynic’. However, as the dog was emblematic of the Cynical School and served as an example of a life of virtue, it is also argued that ‘Cynic’ comes from the ancient Greek term κυνικός (kynikos) meaning dog-like.

Aristotle, a generation later, wrote of Antisthenes but did not link him to the Cynics (even though Antisthenes’ nickname was ‘The Hound’). Similarly, some modern scholars have offered the view that Antisthenes may never have met Diogenes – who was to have a profound effect on the later school of Stoicism. This argument holds that ancient commentaries linking Diogenes to Antisthenes were the result of efforts by the Stoics to create a line of succession that led back to Socrates.

Whatever the case, the influence of Antisthenes’ ascetic sensibilities, dress and attributed sayings can be recognised in the lifestyle and philosophies of Diogenes and other Cynics.

The written works of Antisthenes

Antisthenes’ known works comprise ten volumes written in the form of simple but elegant dialogues often with sarcastic tones. The philosopher, Theopompus, accused Plato of plagiarising many of Antisthenes’ ideas. Fragments of Antisthenes’ written works survive to this day.

Antisthenes taught that, although people believed in many gods, there was only one natural god who was unknowable.

Antisthenes sought to serve humanity by leading people to a life of happiness earned by virtue. He emphasised the importance of a simple life and outlined two sets of values. The first, to be avoided, was external and included pleasure, property, and physical luxuries. The second was internal and included truth, wisdom and the knowledge needed to spread light.

Antisthenes’ life was a model of his own philosophy. He died c. 445 BCE at about eighty years of age.

Antisthenes’ quotes on ethics and virtue

Antisthenes believed that virtue, not pleasure, is the purpose of existence and many of his sayings address this belief:

“Virtue can be taught, and nobility belongs to none other than the virtuous.”

“Virtue is sufficient in itself to ensure happiness since it needs nothing else except the strength of a Socrates.”

“Everything that the wise person does conforms to perfect virtue.”

“Pleasure is not only unnecessary but a positive evil.”

“I’d rather be mad than feel pleasure.”

“It is better to fall in with crows than with flatterers; for in the one case, you are devoured when dead, in the other case while alive.”

“When men are slandered, they should endure it more courageously than if they were pelted with stones.”

“Virtue is an affair of deeds and does not need a store of words or learning.”

“The wise man will be guided in his public acts not by the established laws but by the law of virtue.”

“Virtue is a weapon that cannot be taken away.”

“Virtue is key to society’s survival.”

“To the wise man nothing is foreign or impracticable.”

“The wise man is self-sufficing, for all the goods of others are his.”

“A good man deserves to be loved.”

“Men of worth are friends. Make allies of men who are at once brave and just.”

“Pay attention to your enemies, for they are the first to discover your mistakes.”

“Esteem an honest man above a kinsman.”

“Virtue is the same for women as for men. Good actions are fair and evil actions foul. Count all wickedness foreign and alien.”

“Wisdom is a most sure stronghold which never crumbles away nor is betrayed. Walls of defence must be constructed in our own impregnable reasonings.”