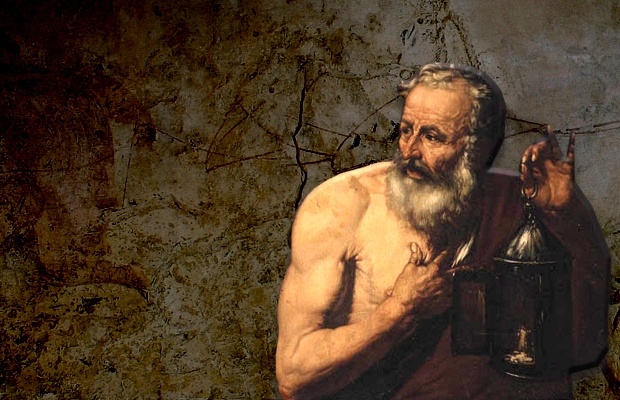 Diogenes the Cynic, a native of Sinope, was the son of Hicesius, a public banker responsible for minting coins. Diogenes remains a controversial philosopher to this day and is remembered for behaviours and quotations that have shocked and inspired people for millennia.

The date of his birth is contentious. It has been variously reported that he was born in either 412 or 404 BC. Even so, it seems his contemporaries believed he was eighty-nine at the time of his death in 323 BC.

Diogenes is often incorrectly regarded as the founder of the Cynical School of Philosophy. That distinction correctly belongs to Antisthenes, but Diogenes had a louder voice and greater influence.

In his youth, Diogenes was a template for men he came to detest. Diocles reported that Hicesius had fled Sinope after being caught debasing its coinage, but Eubulides wrote that Diogenes was alone responsible for the crime and that both men were forced to flee the city together.

Diogenes Laertes, Diogenes the Cynic’s biographer, reported that Diogenes admitted to “adulterating the coinage” in his book, Pordalus.  However, none of his written works survive. Some reports have it that his father died in prison.

Following a pilgrimage to the Oracle at Delphi, Diogenes moved to Athens where he was attracted to the teachings of Antisthenes and sought to become his student. Antisthenes wanted none of it – he did not take on students. However, Diogenes was persistent, and Antisthenes relented after Diogenes approached him with a stick and said: “Strike, for you will not find any stick hard enough to drive me away as long as you continue to speak.”

Diogenes took inspiration from a mouse that he had watched running about neither seeking out comforts nor a place to hide in the dark.

He committed to a life of poverty – at night, he found shelter wherever he could, then folded his cloak in two and slept within it. Until he later required a staff to walk long distances, Diogenes carried with him only a cup and little food within a “wallet”. He dispensed with the cup when he noticed a small boy drinking from his hands.

When he found a large ceramic tub in the Temple of Cybele, he decided it would do for his home. He positioned it in public spaces where he could observe and speak to passers-by. Famously, he always spoke his mind.

He toughened himself against bad weather and adversity and courted trouble.

Diogenes often demonstrated his philosophy by means of theatrical stunts and pranks. He is known to have carried a lantern through the streets of Athens in broad daylight claiming to be looking for an honest man.

On another occasion, he was seen begging for alms from a statue. When asked why he would do such a thing he replied: “To get practice in being refused.”

Diogenes was heroic in expressing his contempt for the rich and famous and other philosophers.

It is said that Alexander approached Diogenes as he was sitting in the sunlight one day and said, “Ask any favour you choose of me,” to which Diogenes replied, “Stop blocking the sun.” It was dangerous stuff to say to someone as volatile and unpredictable as Alexander. Yet, Alexander said that if he could be anyone, other than himself, he would be Diogenes.

It is also said that Diogenes, on hearing this, said, “If I couldn’t be Diogenes, I would still wish to be Diogenes.”

King Phillip had Diogenes brought before him to ask of him who he was. Diogenes answered, “A spy upon your insatiable greed.”

It is uncertain whether these stories are apocryphal, but a succession of historical writers, Greek and Roman, reported them as the truth.

At times, his banter with Plato seemed as competitive as it was philosophical. Diogenes once went to a banquet hosted by Plato, trampled on his rugs, and said, “Thus I trample on the pride of Plato,” to which Plato replied, “With quite as much pride yourself.” Plato was no lightweight.

On another occasion, when Plato was being much admired for his definition of a man – “a two-footed, featherless animal” – Diogenes arrived at Plato’s school with a plucked chicken. “Here is Plato’s man,” he cried.

Diogenes treated most schools of philosophy with even greater scorn. Because he detested rhetoric, few were spared his ridicule. He described the school of Euclides as nauseating and the performances at the Dionysia as “great peep-shows for fools”.

Despite his often-outrageous behaviour, Diogenes was immensely popular with rank-and-file Athenians who had been known to leap to his defence when he was challenged by ruffians. But when Diogenes engaged publicly in sexual self-gratification, he disgusted all but the crudest of onlookers. When challenged about his behaviour he said, “Would that by rubbing my belly I could get rid of hunger.”

Once, Diogenes and a companion visited the home of a wealthy man in Corinth, Diogenes began to clear his throat. When he was warned not to spit, he spat in the man’s face and said he could find no worse place to spit – the home was lavishly decorated.

The Athens elite scorned Diogenes for being the son of a backwoods money lender. (His teacher, Antisthenes, was regarded with similar contempt because his mother was a Thracian.) This must have had a formative influence on the philosophies of both men.

Many quotes attributed to Diogenes reveal his attitude to bigotry and nationalism. When asked where he came from, he famously said, “I am a citizen of the world.”

When he noticed temple officials leading someone from the temple for stealing a bowl, Diogenes noted, “The great thieves are leading away the little thief.”

His philosophies were at extreme odds with those of philosophers such as Plato and Aristotle who wrote elaborate arguments that defended slavery and a world in which Greeks were the ruling class and all others were barbarians.

When Diogenes was asked what the most beautiful thing in the world is, he said: “Freedom of Speech”

The Cynics modelled their behaviours on the lives of dogs and adopted the dog as a symbol of the belief system. The name ‘Cynic’ comes from an ancient Greek term κυνικός (kynikos) meaning dog-like.

Dogs perform all their natural functions in public, eat what is available to them and sleep where they may. They live in the moment and seem to immediately know friend from foe. Dogs live their lives without shame, and Diogenes believed this gave them a morality superior to the most modest of humans. Importantly, dogs guard their interests well and know nothing of hypocrisy or artificial needs.

It is unclear whether Diogenes became known as “the dog” after receiving the epithet by way of insult or because he adopted the term himself, but he embraced it as a virtue.

Some of the most revealing aphorisms attributed to Diogenes have to do with dogs:

“I fawn on those who give me anything, I yelp at those who refuse, and I set my teeth in rascals.”

“Other dogs bite their enemies; I bite my friends to save them.”

“Dogs and philosophers do the greatest good and get the fewest rewards.”

“The art of being a slave is to rule one’s master.”

While on a voyage to Aegina, Diogenes was kidnapped by pirates to be sold into slavery. He accepted his fate with equanimity, and when asked by the auctioneer what he is was good for, Diogenes said, “Ruling men.” Then he pointed at a Corinthian named Xeniades and said: “Sell me to this man; he needs a master,” and Xeniades purchased Diogenes as a tutor for his sons.

Many of Diogenes’ kinder sayings relate to children. It was from a child that he learned he did not need a cup, and once when he was asked if he’d found good men in Greece, he replied, “Good men nowhere, but good boys at Sparta.”

Diogenes took his responsibilities as a teacher seriously.  His two young students memorised large passages of poetry, history and his own philosophical ideals. It was said that he used tricks to improve their memories.

He took a comprehensive interest in their welfare which extended to the way they dressed, wore their hair and exercised. He taught them to be satisfied by plain food and to drink water. He also taught them to ride, hunt, and the art of using a bow, sling and javelin.

The sons of Xeniades held Diogenes in such esteem that upon his death they conducted his funeral in a public space, in Corinth, where a memorial was erected in his honour.

It became a popular tradition that Diogenes and Alexander died on the same day (see Demetrius in On Men of the Same Name).

Cynicism, as an important school of philosophy, was destined to remain a phenomenon of the 3rd Century BCE when Diogenes was its most celebrated adherent. Nonetheless, the Cynics had a profound influence on Zeno of Citium, the founder of Stoicism.

None of Diogenes’ written works survive, although many titles have been attributed to him including Cephalion, Theodorus, Ichthyas, Jackdaw, Hypsias, Aristarchus, Pordalus, The Athenian Demos, Republic, Art of Ethics, On Wealth, On Love, On Death, and Letters.

Historians such as Sosicrates and Satyrus, writing in the 2nd and 3rd Centuries (CE) respectively, dispute Diogenes’ authorship of these works. However, the popular view of that era was that Diogenes wrote some, if not all, of these works. It would be reasonable to assume that much of his writing was done in Corinth – there would be little room for a library in his tub in Athens.

The paraphrased quotes, philosophies, and deeds of Diogenes the Cynic have been passed down to us by biographers such as Diogenes Laertes, Plutarch, Stobaeus, and Philo each with his own variations. In General, the differences do not seem significant enough to affect the intentions of Diogenes’ sayings or the reported events of his life.

“The mob is mother to tyrants.”

“We have two ears and a tongue; so we should listen more and speak less.”

“He who has most is content with the least.”

“The Sun also visits cesspools and is not defiled.”

“A friend is one soul abiding in two bodies.”

“There is only a finger’s difference between a wise man and a fool.”

“Lovers derive their pleasures from their misfortune.”

“Education is a controlling grace to the young, consolation to the old, wealth to the poor, and ornament to the rich.”

“I know nothing, except the fact of my ignorance.”

“Of what use is a philosopher who doesn’t hurt anybody’s feelings?”

“Why not whip the teacher when the pupil misbehaves?”

“No man is hurt but by himself.”

“The vine bears three kinds of grapes: the first of pleasure, the second of intoxication, the third of disgust.”