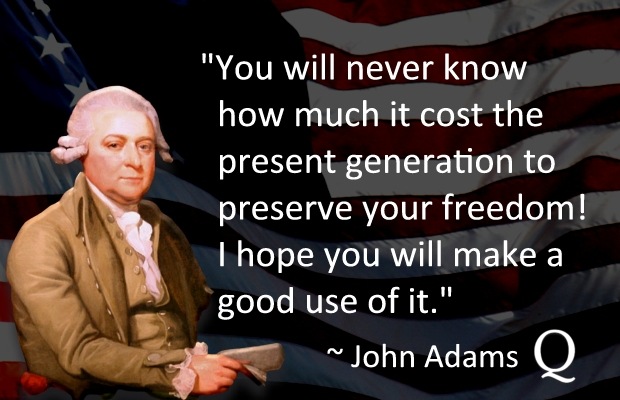 “Posterity! You will never know how much it cost the present generation to preserve your freedom! I hope you will make a good use of it.” ~ John Adams

John Adams was born 30th October 1735 in Braintree, Massachusetts. He was a Founding Father and the second president of the United States of America.

Adams was unique among the Founding Fathers and early presidents: his closest advisor was his wife, Abigail, and together they opposed slavery as an absolute evil.

Adams and Jefferson, friends and revolutionaries, were part of a five-man committee appointed to draft the Declaration of Independence. On Adams’ suggestion, Jefferson was chosen to write the final document. Yet, Jefferson could not debate as well as he wrote, and it was left to the tenacious and persuasive Adams to convince the Congress to ratify the document.

Adams served two terms as George Washington’s vice president and was elected the nation’s second president on Washington’s retirement. Adams ran for a second term but lost to Jefferson. Bitter about the campaign tactics of Jefferson’s supporters, Adams left Washington and did not attend Jefferson’s inauguration.

In an astonishing coincidence, Adams and Jefferson died on the same day, 4th July 1826 – the 50th Anniversary of the signing of the Declaration of Independence.

Scroll back to top
We use cookies to ensure that we give you the best experience on our website. If you continue to use this site we will assume that you are happy with it.OkayPrivacy policy