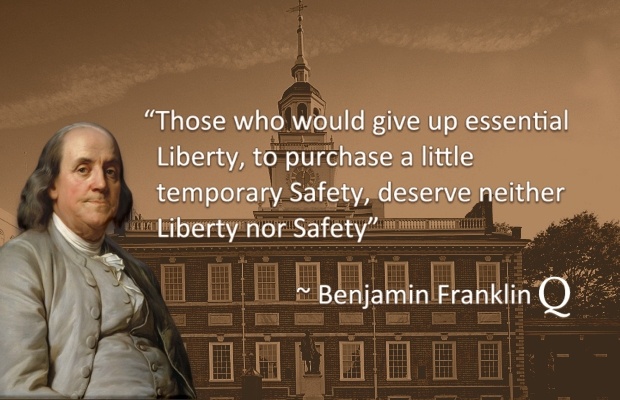 “Those who would give up essential Liberty, to purchase a little temporary Safety, deserve neither Liberty nor Safety” is a quote and motto attributed to Benjamin Franklin.

Morris had requested that funds for the defence of the colony be raised to mount an offense against the Shawnee who had defected to the French and were attacking the Pennsylvanian frontier.

The Assembly’s bill had granted £60,000 for the King’s use to be “backed by a tax on all estates in the province”. The Quaker leaders of the assembly had further requested that efforts be made to satisfy the grievances of the Shawnee who had previously enjoyed harmonious relations with the colony.

Morris was incensed by attention to the grievances “of the Indians now engaged in laying waste the Country and butchering the Inhabitants”. He also rejected the Assembly’s effort to tax proprietorial lands – the Penn family being the proprietors.

What ensued was a clash between Morris and Franklin that ended in a protracted deadlock.

In 1759, Benjamin Franklin published An historical review of the constitution and government of Pennsylvania from its origin by Richard Jackson. Franklin claimed contributions of his own including the motto that appeared on the book’s jacket: “Those who would give up essential Liberty, to purchase a little temporary Safety, deserve neither Liberty nor Safety.”

The conference floated the possibility of compensating the East India Company for the tea dumped into Boston Harbor on December 16, 1773 if Britain agreed to send a royal commissioner to America and repeal the Coercive Acts of 1774.

The Coercive Acts were enacted by the British Parliament in reponse to the “blatant destruction of British Property”. The acts closed the Port of Boston to commercial trade, established military rule in Massachusetts, granted immunity to British officials throughout the colonies and ordered colonists to quarter British troops as required.

The meeting came to nothing. But among his contributions, Franklin made the following comment:

“As to the other two Acts, Massachusetts must suffer all the Hazards and Mischiefs of War, rather than admit the Alteration of their Charters and Laws by Parliament. They who can give up essential Liberty to obtain a little temporary Safety, deserve neither Liberty nor Safety.”

“Those who sacrifice liberty for security/safety deserve neither.“

“He who sacrifices freedom for security/safety deserves neither.“

Poor Richards Almanac was an annual almanac printed by Benjamin Franklin, from 1732 to 1758, under the pseudonym Richard Saunders (Poor Richard). The publication was a best-seller and made Franklin very wealthy.

The following quote appeared in the 1938 Edition:

Benjamin Franklin, born in Boston on 17th January 1706, was a founding father of the United States of America and the most significant revolutionary figure not to serve as president. He co-signed ‘The Declaration of Independence’ and the U.S. Constitution.

He was known as ‘The First American’ for his advocacy for colonial unity which he advanced through his roles as a diplomat, author, and public spokesman.

As Ambassador to France, Franklin championed the development of Franco-American relations.

He was a slave owner who had a change of heart and became president of the Abolition Society in 1787. Franklin later petitioned Congress, unsuccessfully, to abolish slavery.

Franklin is also remembered as one of the greatest scientists of his day. He was a trailblazer in the field of physics and electricity, and he altered the pattern of Atlantic navigation through his research into the Gulf Stream.

His inventions include the lightning rod, bifocal spectacles, and the Franklin Stove.

Franklin was cherished for his civic activism: He founded the University of Pennsylvania, the Union Fire Department, the Library Company of Philadelphia and served as the 6th President of Pennsylvania.

Jackson, R. and Franklin, B., 1759. An historical review of the constitution and government of Pennsylvania from its origin. 1st ed. Boston: B. Franklin.