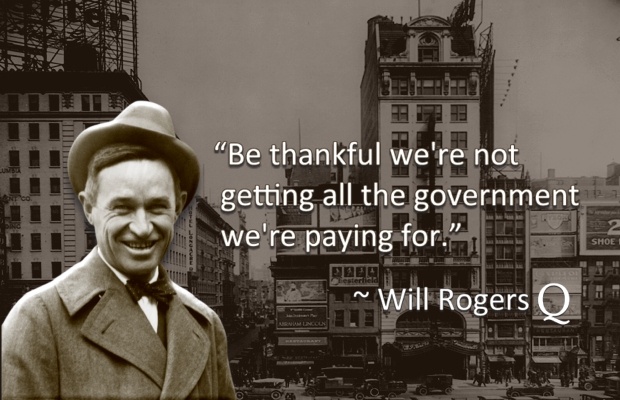 Will Rogers’ quotes about government were insightful and acerbic. Here are a few of his best:

“Be thankful we’re not getting all the government we’re paying for.”

“I belong to no organized party. I am a Democrat.“

“I don’t make jokes. I just watch the government and report the facts.“

“Everything is changing. People are taking their comedians seriously and the politicians as a joke.”

“If you ever injected truth into politics you have no politics.”

“The only difference between death and taxes is that death doesn’t get worse every time Congress meets.”

“About all I can say for the United States Senate is that it opens with a prayer and closes with an investigation.”

“Congress is so strange; a man gets up to speak and says nothing, nobody listens, and then everybody disagrees.”

Rogers was born in Oklahoma, on Native American land, in 1879. Both his parents were of Cherokee descent. He spent his early days breaking horses and ‘trick roping’ before he came into his own as a vaudeville wise-cracker. In his own words, he went from a ‘ropin’ fool to a ‘talkin’ fool. His monologues were famous for his observational humour. The government and politicians were his popular targets.

Rogers had a folksy, down-home, style of delivery and wrapped up his monologues with a few kind but banal lines. His most famous quote is: “I joked about every prominent man of my time, but I never met a man I didn’t like.” It became his epithaph.

A jack of all trades

The diversity of Rogers’ interests and his work ethic was astonishing.

He performed with the Ziegfeld Follies from 1916 until 1925 and made sixty-nine films, mostly silent.

He undertook national lecture tours, was a popular speaker at conventions, worked in radio and on Broadway and was appointed Goodwill Ambassador to Mexico.

Rogers also wrote a newspaper column from 1922 until his death and was the author of numerous books and essays.

On 15th August 1935, Will Rogers was killed in a plane crash in Alaska. He was a passionate aviator and had acted as an advocate for the aviation industry for nearly a decade.