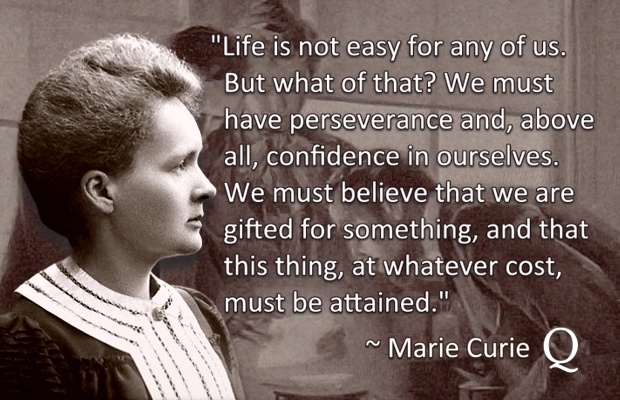 Marie Curie well understood the importance of perseverance and confidence when she shared her philosophy in the following quote:

“Life is not easy for any of us. But what of that? We must have perseverance and, above all, confidence in ourselves. We must believe that we are gifted for something and that this thing, at whatever cost, must be attained.”

In late 19th Century Poland, the idea that young Marie Sklodowska would become one of the leading scientists of the 20th Century would have been met with laughter and derision. As a woman, she could not enrol in a Polish university despite being a pre-eminent candidate. Nevertheless, she did commence clandestine scientific studies at an underground university in Warsaw.

At the same time, she toiled as a governess and saved enough money to apply to the Sorbonne (The University of Paris) in 1891 at the age of twenty-four. To the university’s credit, she was accepted – her gifts and qualities were undeniable – but life in Paris was a terrible struggle for an impoverished student. She could not afford to heat the humble garret in which she lived and was known to pass out from hunger on occasion.

Marie met Pierre Curie in 1894 and they became partners in research. They worked in an improvised laboratory within the university grounds. In fact, it was nothing more than a leaky shed.

Marie and Pierre married in 1895, and after her daughter, Irene, was born in 1897, Marie took a teaching job to help support the family. At the same time, she continued her research into ‘the radiation phenomenon’ with Pierre. She had become a mother, teacher and research scientist. Yet nothing seemed to slow her down.

In 1903, Marie shared the Nobel prize for Physics with her husband and Henri Becquerel. She was the first woman to win the coveted prize.

The financial award that came with the Nobel Prize enabled Marie and Pierre to fund a well-equipped laboratory, and the couple had seemingly arrived at an ideal point in their lives. But that soon changed. When Pierre was killed in a road accident, Marie’s powers of perseverance were tested to the extreme. She was devastated. Yet she recovered from the blow, and her fame and list of accomplishments grew:

In the years to follow, awards and honours followed thick and thin. But her work with radiology came at a price: Marie Curie died from aplastic anaemia in 1934, a consequence of long-term exposure to radiation.

“Nothing in life is to be feared, it is only to be understood.“

“One never notices what has been done; one can only see what remains to be done.”

“All my life through, the new sights of Nature made me rejoice like a child.”

“You cannot hope to build a better world without improving the individuals. To that end, each of us must work for his own improvement, and at the same time share a general responsibility for all humanity, our particular duty being to aid those to whom we think we can be most useful.“