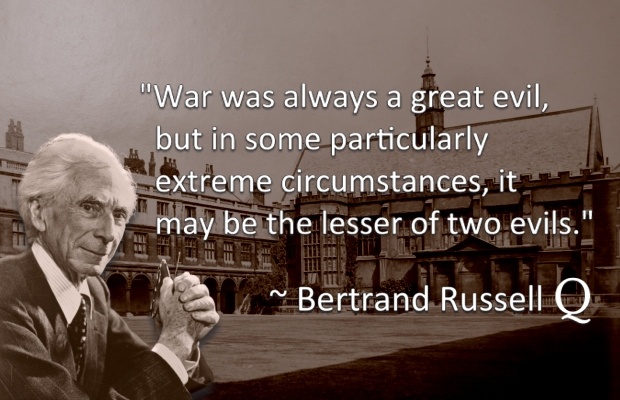 Until World War II, Bertrand Russell’s quotes on war were indicative of his deeply-held, pacifist beliefs. Yet, in the face of Nazi aggression, he felt compelled to outline a distinction between ‘Pacifism’ and ‘Relative Political Pacifism’.

“Of all evils of war, the greatest is the purely spiritual evil: the hatred, the injustice, the repudiation of truth, the artificial conflict.” (1914)

In 1916, Russel was arrested for anti-war activities under the ‘Defence of the Realm Act’ (1914).  He did not receive a custodial sentence, but he was sacked from his position as a lecturer at Trinity College, Cambridge.

“I hate the world and almost all the people in it. I hate the Labour Congress and the journalists who send men to be slaughtered, and the fathers who feel a smug pride when their sons are killed, and even the pacifists who keep saying human nature is essentially good, in spite of all the daily proofs to the contrary. I hate the planet and the human race – I am ashamed to belong to such a species.” (1916)

Russell was again arrested in 1918 and sentenced to six months imprisonment in Brixton Prison, ostensibly for interfering in British Foreign Policy. Of his incarceration, he later wrote:

“I found prison in many ways quite agreeable. I had no engagements, no difficult decisions to make, no fear of callers, no interruptions to my work.” (1967)

By 1940, Russell had come to the conclusion that Hitler represented an existential threat to European democracies and needed to be opposed. Russel was not a man ashamed to change his mind and, in 1943, he labelled his new philosophy ‘Relative Political Pacifism’.

“Ever since the war began, I have felt that I could no longer go on being a pacifist, but I have hesitated to say so, because of the responsibility involved. If I were young enough to fight myself, I should do so, but it is more difficult to urge others. Now, however, I feel that I ought to announce that I have changed my mind.” (1940)

Russell shocked his adherents in 1948 by making a statement that appeared to encourage an unprovoked nuclear attack on Russia by the United States. He said:

“Either we must have war against Russia, before she has the atom bomb, or we will have to lie down and let them govern us . . . Anything is better than submission.” (1948)

Russell was horrified by the prospect of a nuclear-equipped Russia. The United States, under Truman, had offered a solution that Russell felt was workable – The Baruch Plan. Russell would later say:

“. . . this plan “had very great merits and showed considerable generosity when it is remembered that America still had an unbroken nuclear monopoly.” (1961)

The Baruch Plan required the US government to decommission all of its own atomic weapons and make nuclear technology available for peaceful uses, provided that all other countries undertook to never produce atomic weapons and submit to monitoring and inspections. The Plan was submitted to the United Nations in 1946 and rejected by the Russians.

“Neither a man nor a crowd nor a nation can be trusted to act humanely or to think sanely under the influence of a great fear.” (1950)

Russel was opposed to American intervention in Korea and Vietnam.

In 1966, he established the Russell Tribunal with the participation of Jean-Paul Sartre, and other notable public figures, many of whom embraced left-wing political causes. Its purpose was to investigate America’s foreign policy and its intervention in Vietnam.

The commission, though privately constituted, justified its existence by invoking the same criteria the United States had used to justify the Nuremberg War Crimes Trials following World War II. Nevertheless, The United States was not represented at the two sessions conducted in 1967 in Stockholm, and Roskilde, Denmark.

The tribunal unanimously found that the United States was guilty of genocide and other crimes against international law and that Australia, New Zealand, South Korea, Japan, Thailand and the Philippines were complicit.

The findings were all but ignored in the United States.

In September 1961, Russell was arrested for “breach the peace” after participating in an anti-nuclear demonstration in London. He was eighty-nine. A magistrate sentenced him to seven days imprisonment to be wholly suspended if Russell promised to behave himself. Russell said,  “No, I won’t,” and served his sentence in Brixton Prison.

On 23rd October 1963, following John F. Kennedy’s announcement that a blockade of Cuba was now in place, Russell dashed off a series of desperate cables. The two most important were sent to Kennedy and Kruschev.

Russell’s cable to Kennedy was an outright condemnation of the American position.

“To President Kennedy: Your action desperate. Threat to human survival. No conceivable justification. Civilized man condemns it. We will not have mass murder. Ultimatums mean war . . . End this madness.”

On the other hand, the cable to Kresvev was conciliatory. It urged the Russian leader not to “be provoked by the unjustifiable action of the United States in Cuba”.

There is no evidence that suggests that Russell was able to influence the outcome of the crisis. But Krushev made good use of Russell’s cables for propagandistic purposes.