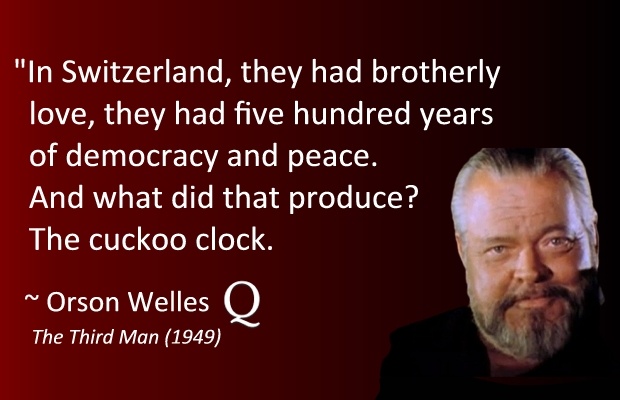 “Holly, I’d like to cut you in, old man. There’s nobody left in Vienna I can really trust, and we’ve always done everything together. When you make up your mind, send me a message – I’ll meet you any place, any time, and when we do meet old man, it’s you I want to see, not the police. Remember that, won’t ya? Don’t be so gloomy.

After all, it’s not that awful. You know what the fellow said – in Italy, for thirty years under the Borgias, they had warfare, terror, murder, and bloodshed, but they produced Michelangelo, Leonardo da Vinci, and the Renaissance. In Switzerland, they had brotherly love, they had five hundred years of democracy and peace. And what did that produce? The cuckoo clock.

Welles would later learn that cuckoo clocks are made in Germany, not Switzerland. Unlike so many of his movies, Welles neither wrote nor directed The Third Man. However, he admitted to adding the lines in question and never threw award-winning author Graham Green, who wrote the screenplay, under the bus.

Welles was reminded of the error by fans for the rest of his days, particularly those in Germany. In his last interview filmed on 9th October 1985, Welles told Merv Griffin:

“I wrote that line and then was indignantly denounced by all the Germans because it turns out the Swiss don’t make cuckoo clocks. Germans do, in the Schwarzwald.”

Barbara Leaming, who had written an unauthorised biography of Welles, also appeared in the episode and later joined Welles for dinner at his favourite restaurant, Ma Maison. After dinner, Welles returned to his home and died of a heart attack a few hours later.

George Orson Welles was born on 6th May 1915 in Kenosha, Wisconsin.
Welles is widely regarded as a true genius and one of the greatest filmmakers ever. He is also lauded for his innovative work in radio and theatre.
He is best remembered for his movies, Citizen Kane (1941), The Lady from Shanghai (1947), and Touch of Evil (1958).Welles died of a heart attack in Los Angeles, California on 10th October 1985.