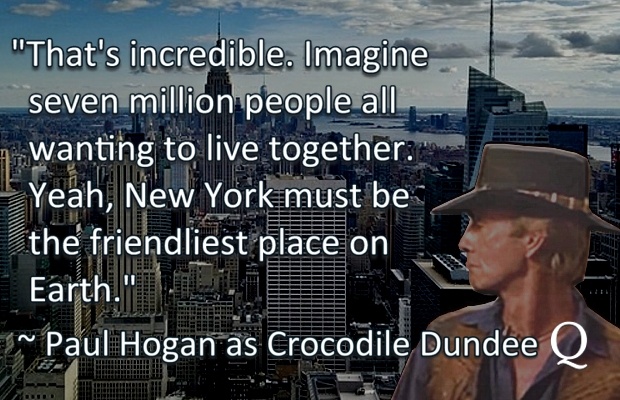 In his 1986, film sensation, Crocodile Dundee, Paul Hogan who played the eponymous character said: “That’s incredible. Imagine seven million people all wanting to live together. Yeah, New York must be the friendliest place on Earth.”

It was one of several lines from the movie still quoted today, the most famous of which comes from the following exchange in the movie that occurs when juvenile delinquents attempt to mug Crocodile Dundee at knifepoint:

Sue Charlton: Mick, give him your wallet.

Crocodile Dundee: What for?

Sue Charlton: He’s got a knife.

Crocodile Dundee : [revealing his own much larger knife] That’s a knife!

Paul Hogan was born on 8th May 1939 in Sydney, New South Wales, Australia.
In 1971, while working as a rigger on the Sydney Harbour Bridge, Hogan entered the TV talent show, New Faces, ostensibly as a “tap-dancing knife-thrower”. His actual act was a comedy performance that mocked the show’s judges and other performers. From this inauspicious start, Hogan rose to become one of the most popular comedians and television personalities in Australia.
His motion picture career began in 1986. He won a Golden Globe Award for Crocodile Dundee and was an Academy Award Nominee.