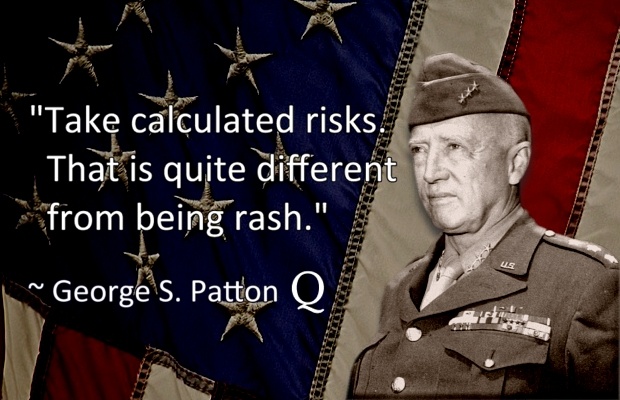 When General George S. Patton said, “Take calculated risks. That is quite different from being rash,” it clarified his more famous quote, “A good plan, violently executed now, is better than a perfect plan next week.”

Today, a variation of the quote, “A good plan today is better than a perfect plan tomorrow,” has become a popular business axiom. However, Patton’s original quote, intended for military application, was perceived by some to be indicative of a tendency in Patton to conceive and execute rash, impulsive battle plans. Yet, even though Patton could be uncooperative and was prone to making embarrassing gaffes, his successes were undeniable. Moreover, the respect and admiration felt for him by the men he commanded were unquestionable.

Generals Eisenhower and Marshall had concerns about Patton’s temperament and reliability when they selected Omar Bradley, Patton’s subordinate, to lead the Allied invasion of Europe during World War II. They had no doubt about Patton’s capacities but saw Bradley as the more cooperative and dependable general for such a high-stakes military operation. Despite this, the Germans were convinced that Patton was the best general the allies had and fully expected him to lead the allied invasion forces. Consequently, they monitored his movements obsessively.

Patton was put to use in a great deception known as Operation Fortitude, whereby the German’s intercepted unreliable intelligence about a great army to be led by Patton in an invasion to take place at the Pas de Calais. The operation involved decoys, props, strategic troop movements, fake radio signals and the use of counter-intelligence agents. The plan worked and helped make the Normandy Invasion the success it was.

Patton was given the command of the U.S. Third Army and next saw action in Normandy in July 1944. Even though he faced less opposition than the three other allied field armies, he demonstrated his talent for flexible innovation and exploited allied air superiority and intelligence to make an awe-inspiring drive into northern France, covering nearly one hundred kilometres in the first two weeks. His attack was halted near the Moselle River for lack of fuel.

This gave the Germans time to strengthen their forces at nearby Metz. In the ensuing battle, The Battle of Metz, the two armies stood deadlocked for more than two months and both sustained heavy casualties. Metz finally fell to the Third Army in December 1944, but the engagement is not generally considered to be one of Patton’s most dynamic or decisive battles. Yet, in the weeks to follow, Patton’s military leadership would become legendary.

The Battle of the Bulge

In December 1944, German forces massed for the Ardennes Counteroffensive, more commonly remembered as the Battle of the Bulge. On 16th December, the Germans, under the command of Gerd von Rundstedt attacked through dense forest in the Ardennes region of Belgium and Luxembourg. Their objective was to divide the allied forces and recapture the port of Antwerp.
Within days, German forces had surrounded Bastogne trapping the 101st Airborne Division and elements of the 10th Armored Division. To plan a response, Eisenhauer scheduled a meeting of the senior allied commanders of the Western Front. He asked Patton how long it would take him to disengage six of his divisions to launch a counter-attack at Bastogne. Patton replied, “As soon as you’re through with me.”
By all accounts, Eisenhauer was incredulous and feared that Patton’s offer was rash and could lead to disaster. At the time, the Third Army was engaged in heavy fighting near Saarbrücken.
It was at this moment that Patton demonstrated the difference between being rash and being ready. He had anticipated the possibility of a scenario such as the one being discussed and had prepared a contingency plan that was ready to go. In fact, he had also drawn up plans for three possible scenarios.
He immediately ordered three of his divisions to disengage and wheel north towards Bastogne. They were soon joined by three additional divisions. Although initially hampered by poor weather, Patton’s forces cleared a corridor to Bastogne on 26th December and relived the forces there. It was Patton’s most brilliant military operation and one of the most remarkable achievements of the European war.

George S. Patton was born on 11 November 1885 in San Gabriel, California. He gained fame as a U.S. Army general during World War II and is best remembered for his dynamic leadership of the U.S. Third Army during the allied invasion of Europe.

Patton operated in the African, Mediterranean and European theatres of World War II but is best remembered for his dynamic leadership of the Third Army in France, Belgium, and Germany.

Biographer, Ladislas Farago, wrote that Patton was the allied general most feared by the German high command which monitored his whereabouts obsessively.

He was laid to rest in the Luxembourg American Cemetery and Memorial with men of the Third Army who fell under his command.