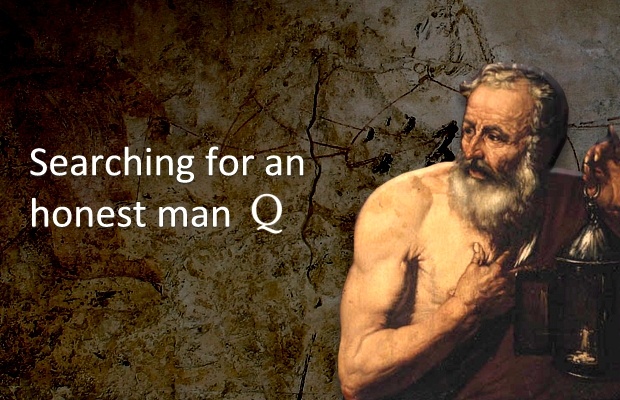 Diogenes the Cynic, also known as Diogenes of Sinope, often resorted to theatrical devices to demonstrate a philosophical point. According to Diogenes Laërtius, Diogenes once roamed the streets of Athens carrying a lit lamp. When asked what he was doing, Diogenes said, “I am looking for a human being.” This quote is more commonly translated as “I am looking for an honest man.”

Diogenes the Cynic was born in Sinope. The year of his birth is uncertain. However, it has been reported that he was eighty-nine at the time of his death in 323 BC.

He was born to a banker entrusted with the responsibility of minting coins. As a very young man, Diogenes was sentenced to exile for adulterating the coinage.

In later years, he was later reminded of his sentence and replied, “And I sentenced them [the people of Snipoe] to stay at home.”

In exile, Diogenes travelled to Athens and became a student of Anthisenes, the founder of the Cynical School of Philosophy. Anthisenes had been a student of Socrates and opposed bigotry based on race or class. Like Socrates, Anthisenes taught the children of the poor.

For Cynics, dogs were emblematic. Anthithesenes, himself, was known as ‘The Hound’. Diogenes followed the example of dogs by eating, sleeping, performing bodily functions and engaging in self-gratification in public without shame. He came to be known as ‘The Dog’.

He lived in a ceramic tub he had found in Temple of Cybele and carried with him only a staff and a small wallet for his food.

Despite his shameless behaviour, Diogenes was a popular figure among the ordinary folk of Athens. However, the wealthy and influential were another story altogether. Diogenes was openly hostile to men of privilege and other philosophers.

He particularly enjoyed irritating Plato. Highly regarded philosophers such as Aristotle and Plato had argued that Greeks were the ruling elite and all others were barbarians. But Diogenes, who described himself as “a citizen of the world”, found these philosophers to be disingenuous and hypocritical. He rationalised his own philosophy of entitlement with the following argument:

While travelling Aegina by ship, Diogenes was kidnapped and sold into slavery. This was probably pre-arranged by someone he had offended in Athens or Sinope.

At the slave market in Crete, it’s claimed that Diogenes pointed to a Corinthian named Xeniades and said: “Sell me to this man; he needs a master.”  Xeniades agreed and Diogenes’ was taken to Corinth to tutor Xeniades’ sons, a role that Diogenes performed dutifully.

Diogenes and Alexander the Great

When Diogenes died in Corinth in 323 BC, the sons of Xeniades conducted his funeral rites in a great public space where a memorial was erected in his honour.

He is remembered as the most significant adherent of the Cynical School of Philosophy and is believed to have profoundly influenced the Stoics that followed.