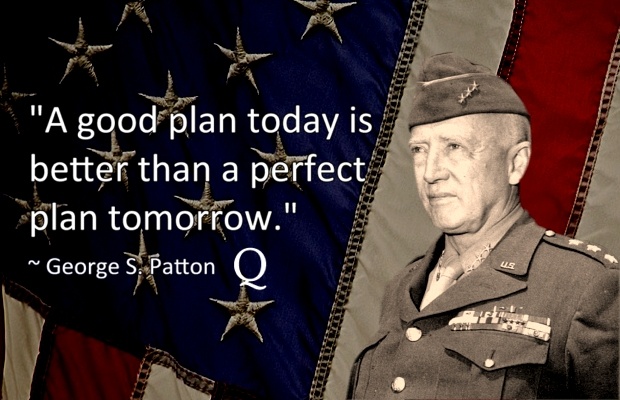 Patton actually said: “A good plan, violently executed now, is better than a perfect plan next week.” The quote had military application. However, today, its variation is a popular aphorism used in business.

The quote seems to address indecision, the human capacity to second guess a decision, and perhaps fear of failure.

The quotes, “He who hesitates is lost” and “Carpe diem” (Seize the Day) uphold a similar philosophy. Yet, one may argue that these less specific maxims could encourage reckless action – something that Patton was often accused of himself and which he disavowed when he said: “Take calculated risks. That is quite different from being rash.”

Patton believed that a plan of action must be sound if not perfect. Patton took the view that you make your plans as best you can and then execute them with immediacy and total commitment.

In life, many take the view that too many opportunities are lost because people fail to take decisive action. They fine-tune their plans, put them away, take another look, make a few alterations, hesitate and then fail to act in time if at all.

George S. Patton, born 11th November 1885, came to prominence as general in the U.S. Army during World War II. A highly controversial figure, he was nicknamed “Old Blood and Guts”.

He operated in both the Mediterranean and European theatres of war but is best remembered for his dynamic leadership of the Third Army in France and Germany.

Patton biographer, Ladislas Farago, wrote that Patton was the allied general most feared by the German high command which monitored his whereabouts obsessively.

6 thoughts on “A good plan today is better than a perfect plan tomorrow. ~ George S. Patton”