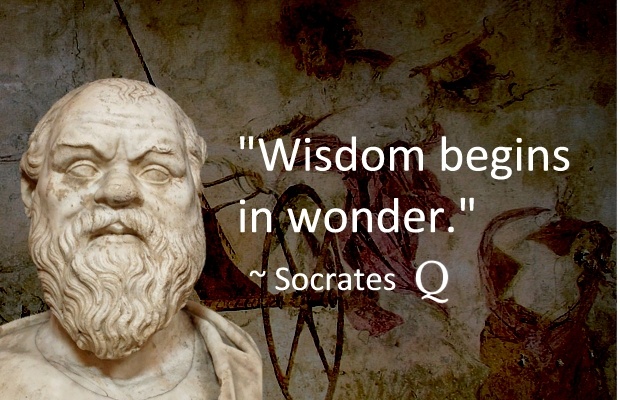 This comment, as reported by Plato, was directed by Socrates to a student, Theaetetus, during a dialogue concerning the nature of knowledge.

None of Socrates’ written work survives. We know him chiefly through the works of his students and contemporaries – most significantly, Plato, Xenophon and Aristophanes.

Socrates was born in either 469 or 470 BC at Deme Alopece, Athens. He is believed by many to be the father of western philosophy. His ideologies concerning the fields of Ethics and Epistemology underpin this legacy.

He is best remembered for the ‘Socratic Method’, whereby the underlying beliefs of a hypothesis are challenged through a series of questions designed to uncover inadequacies of knowledge and eliminate contradictions. His method, designed to reveal better hypotheses, has significantly influenced western philosophy and research.

Critical of the Athenian political status quo, Socrates was charged with, and found guilty of, impiety and corrupting the minds of the youth of Athens.  He was sentenced to death by poisoning in 399 B.C. Read More [ … ]