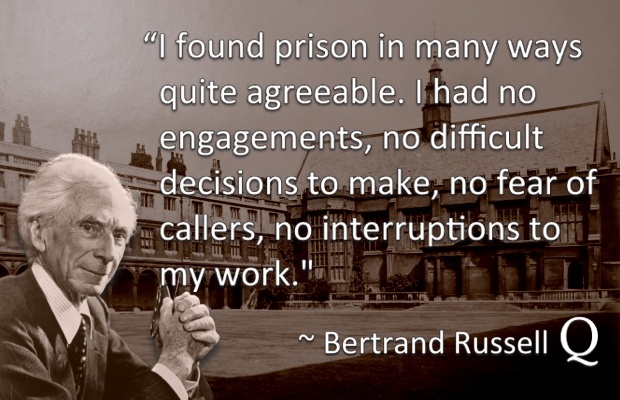 Russell made the following comments about his time in prison for political activism:

“I found prison in many ways quite agreeable. I had no engagements, no difficult decisions to make, no fear of callers, no interruptions to my work. I read enormously; I wrote a book, “Introduction to Mathematical Philosophy”… and began the work for “The Analysis of Mind”. I was rather interested in my fellow-prisoners, who seemed to me in no way morally inferior to the rest of the population, though they were on the whole slightly below the usual level of intelligence as was shown by their having been caught.”

On one occasion a prison warden had to remind Russell that prison was a place of punishment –  Russell had laughed out loud while reading a book.

Bertrand Arthur William Russell was born on 18th May 1872 in Trellech, Monmouthshire, United Kingdom, the youngest child of Lord and Lady Amberley. He would later become 3rd Earl Russell, an aristocrat with socialist sensibilities.

He is remembered as a philosopher, polymath, mathematician, logician, political analyst, social critic, and writer.

The Russell led “revolt against idealism” during the early 20th century brought attention to his political activism. He was also seen as a high-profile socialist and pacifist. However, he would later claim that he was a sceptic by nature and had “never been any of these things, in any profound sense”.

In 1905, he wrote On Denoting, a philosophical essay described by Frank P. Ramsey as “that paradigm of philosophy”. It became the basis for Russell’s ‘descriptivist theory’ and has profoundly influenced mathematics, set theory, logic, cognitive science, artificial intelligence, computer science, philosophy of language, metaphysics, epistemology, and linguistics.

Along with Gottlob Frege, G. E. Moore, and Ludwig Wittgenstein, Russell co-founded ‘analytic philosophy’, a tradition of philosophy that relies on analysis. Its arguments are characterized by clarity and vigour and frequently cite formal logic, mathematics and the natural sciences.

Russell was also one of the 20th Century’s premier logicians, and co-authored Principia Mathematica with Alfred North Whitehead to establish and promote a logical basis for mathematics. It was first published in 1910.

The same year Russell was invited to become a lecturer at Trinity College, Cambridge, where he had been a student; however, when he was arrested for his pacifist activities under the ‘Defence of the Realm Act’ introduced in 1914, he was dismissed from the college. He was later reinstated.

Russel was again arrested for his public lectures against the U.K. government’s lobbying of the United States to enter the war. This time, he was sentenced to six months imprisonment in Brixton Prison. Of his time in confinement, Russell wrote:

“I found prison in many ways quite agreeable. I had no engagements, no difficult decisions to make, no fear of callers, no interruptions to my work.”

Russel remained a lifelong pacifist launching campaigns against war and the use of nuclear weapons for the remainder of his life. Even so, during World War II, he adopted a policy of ‘relative political pacifism’ whereby “War was always a great evil, but in some particularly extreme circumstances, it may be the lesser of two evils.” Russell recognized Hitler as a threat to European democracy.

In 1950, Bertrand Russell was awarded the Nobel Prize in Literature “in recognition of his varied and significant writings in which he champions humanitarian ideals and freedom of thought.”

He died in Caernarfonshire, Wales on 3rd February 3 1970. He was ninety-seven.